At least ten thousand years ago, Paleo-Indians used to gather north of what is now Greene County, along the Shenandoah Valley, in search of their main source of spear and knife points: jasper. These hunters, however, only stayed for short periods of time to enjoy temporary hunting grounds in the Shenandoah mountains. It is not surprising that artifacts from ten thousand years ago are rare and have never been found in Greene County. However, it is inconceivable that some adventurous group, possibly during a point in time when animals were fewer and more difficult to find, did not find their way into what is now Greene County.

Over time, with the retreating of glaciers and changing of the climate, Virginia became a warmer place with nut-producing trees and berry-producing bushes. While some bands of Paleo-Indians followed the glaciers north, other natives found permanent cave protection in the new warm environment where they could not only hunt but gather plenty. In 1953, archaeologists found and surveyed a rock shelter just west of Brown's Cove in Albemarle County which yielded proof of residency over a considerable period of time. Other examples of artifacts from c. 2000 BCE found in Greene County include stone ax heads, mortars, pestles and pottery.

Early European explorers in what is now Greene County, encountered Monacan Indians, what we now know to be a loose confederation of tribes related to those living in the Dakotas. Other tribes called them "Siouan", meaning "diggers in the dirt" in Algonquian language, for their traditions of cultivating corn, squash and other greens. While farming was their trademark, the hundreds of small arrows that have been found in the County show us that they were still hunters as well.

Explorers did find strong tribes, but early settlers found few if any natives. The pressure of white man's western movement, including the introduction of certain European diseases, probably caused remaining Indians to abandon the land. Today, there are still a few people near Amherst, Virginia who claim to be descendants of the Monacan tribe.

In Greene County there is a persistent belief that some residents in the hollows have some Indian blood. We do know that in the period between the earliest colonists and the arrival of settlers, traders and trappers ventured deep into the Appalachian Mountains. Historically throughout the country, traders took native women as consorts both for personal interest and for diplomatic ties to local tribes. When the Indians left the area, it seems possible that a few descendants of the traders and trappers - with Indian blood - remained to intermarry with a few early settlers. It is doubtful if we will ever know for certain whether or not Indian blood remains in Greene County.

The Beginnings of Greene County

Around 1670, statutes aimed at controlling Indian trade prove that there existed extensive independent traders in the area. But in 1679, German scholar John Lederer led an expedition commissioned by Lieutenant Governor William Berkeley. They traveled along the Pamunkey River to the "Apalateaean (sic) Mountains", encountering what we believe to be many sites in Greene County including the Rapidan River, Swift Run River and Hightop Mountain. The more well known expedition of Lieutenant Governor Alexander Spotswood set out on August 29, 1716 with 63 men and 73 horses. A preponderance of evidence indicates that they crossed the mountains at Swift Run Gap, traveling through what is now Greene County. The symbol of Greene County comes from this legendary trip, and the Greene County Historical Society's publication, A Greene County History, chronicles the legend: "We are told that [at the end of the journey, Spotswood] gave each of [his men] a golden horseshoe in which colored stones represented the nails. On one side was the Latin motto, 'Sic juvat transcendere montes' (How delightful it is to cross mountains). On the other side were the words, 'The Tramontane Order.' [Tramontane is a classical Italian-derived word referring to anything that comes from, or anyone who lives on, the other side of mountains]. Unfortunately the golden horseshoes, if Spotswood did actually present them to the men, have all been lost." 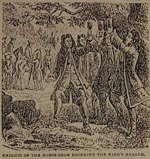 Within 20 years, almost all of what is now Greene County, except the more mountainous land, had been taken up in grants from the King of England, a total of c. 60,000 acres. One survey marker from an eight-piece (Octonia) grant still remains as a National and State Registered Historical site, the Octonia Stone. There were actually a number of rigorous requirements for keeping such a grant and after the initial eight grantees failed at meeting the requirements, the grant was renewed in 1729 to only one man - Robert Beverly. Through marriage into the Beverly family, William Stanard managed to inherit a significant portion of the Octonia grant in 1756. But after a lifetime of development of his own Stanard - ville and accession to membership in the Virginia House of Delegates, at his death William had sold or given away 4,520 acres of the inheritance. In 1816, a commission of three men, including William's son Robert Stanard, sold the remaining acreage. Despite the legal progression of land ownership, the village previously owned and heavily developed by William Stanard remains named after him and is the only legally recognized town in Greene County.

For reasons of distance from legal proceedings and a fear of the more dense slave population in lower Orange County, attempts began in 1819 to separate the "Upper District" from the "Lower District" in Orange. Finally in 1838, Senator Thomas Davis successfully passed "An Act Forming a New County out of the County of Orange." The new county was given the name of Nathanael Greene who gained fame in the Revolutionary War as second-in-command to General George Washington, and Stanardsville was chosen to be the County seat.

However, the first time that any military action happened in Greene County and the conflict with the highest casualty rate for Greene County was the bloody American Civil War. There were eleven officers and at least 94 enlisted soldiers who joined the Confederate Army. Of those men seven were killed, eleven died during the war (is it assumed they died mainly from disease and infection), thirty were wounded and fourteen others were captured. Full two-thirds of the known soldiers were casualties. It is unknown and certainly undocumented if any men from Greene County decided to fight for the Union Army.

The Deserters of Hensley Hollow

The first Civil War excursions into Greene County involved the efforts of General Stonewall Jackson to capture a band of Confederate deserters of supposedly 200-500 men hiding in the mountains. The men were on the Western side of the mountains in Hensley Hollow, inside Rockingham County lines. The first search conducted by company F, Twelfth Cavalry, and led by Captain Harry Gilmor, gave up after two or three days of fruitless effort in what must have been very strange and difficult terrain. The second attempt made by two companies and led by Greene native Captain Lynn B McMullan and Captain Naderbush was successful in a way. Forty-eight men were driven over mountains into Greene County and captured. The enormous difference between the original estimates of 200-500 men and the 48 captured was never explained. While this was a minor incident during the war, it must have provided considerable excitement for the mountain people.

In February of 1862, 8,500 Confederate soldiers led by General Richard S. Ewell made two camps in Greene County to protect Swift Run Gap and to be prepared to join General Jackson in the Shenandoah Valley. During the short period that they were camped in eastern Greene County, some of Ewell's men contracted an unknown disease (probably typhoid fever). The sick were treated in the basement of the Stanardsville Methodist Church and other available buildings by local women who served as nurses. In spite of their assistance, over 30 men died of the disease and were buried somewhere near the Shiloh Baptist Church. No one has been able to find the exact grave sites.

The Battle of Stanardsville

In 1864, the Union armies planned and carried out a diversionary drive through Greene County to Charlottesville where they hoped to disrupt Confederate communications, destroy bridges and mills, and generally divert Confederate attention from the important action at Richmond. Union General George Custer was in charge of 1,500 soldiers who stopped in Stanardsville on March 1, 1864, long enough to destroy the Confederate Supply Depot there and plunder public buildings, all the while holding the men of Stanardsville hostage. Custer's troops went on their merry way south but met a small Confederate force stationed at Rio Hill which forced the Union forces into retreat. Union and Confederate forces were in sporadic contact until the Union forces attempted to cross the Rapidan River into Madison County. On that spot was a skirmish now called the "Battle of Stanardsville". Following the relatively brief battle, Custer continued his retreat having accomplished his mission.

In the late 1920's and into the 1930's the Commonwealth of Virginia used the power of eminent domain to acquire land for donation to the federal government in order to create Shenandoah National Park. From 1081 individual tracts of land, over 500 families and individuals were displaced from their homes so that the park could be established.

The Blue Ridge Heritage Project will acknowledge and honor the people whose sacrifices made it possible for us to have the Shenandoah National Park to enjoy today and into the future.

All information and photos available courtesy of the Greene County Historical Society, located on 360 Main Street in Stanardsville. The Greene County Historical Society is open to the public Fridays and Saturdays from 10am to 3pm, as well as other times by request. Call 434-985-1409 or e-mail This email address is being protected from spambots. You need JavaScript enabled to view it..

With convenient access to Skyline Drive and the Appalachian Trail, Greene County is the perfect place to explore our natural beauty and revitalize your senses.

Visit the Economic Development and Tourism Department for information on starting a business in Greene.

A new artist to the Virginia Clay Festival 2019. Looks like it will definitely be a fun booth to visit. Mark your… https://t.co/OAv4grLyi1